Nyangchi,"throne of the sun" in Tibetan is located in southeast Tibet,where the Himalaya Mountains and Nyainqentanglha Mountains extend from west to east,like parallelhuge dragons,to join the Himalaya Mountains in the east. It is adjacent to Yunan and Qamdo to the east and northeast, Naqu to the north, Lhasa to the west and Shannan to the southwest. It is a neighbor to India and Myanmar to the south with a border as long as 1,006.5 km. Nyinggchi area, with a total area of 117,000 sq km and a population of more than 140,000 has 7, countries under its jurisdiction : Nyingchi, Mainling, Gongbo'gyamda, Medog, Bome, Zaya and Nang. With green mountain slopes, snow-capped peaks and crystal-clear rivers, Nyingchi looks just like heaven on the Qinghai-Tibetan Plateau.

Nyangchi is in the Eastern Tibet, it has a dramatically different climate from the rest of Tibet. There is heavenly rain in from early June to September. Snowfall starts in October. The best time to travel March, April and early May to November.

Getting around Tibet can be difficult : Buses are often gasping their last while traveling 4WD can be expensive. Road safety is littlie more than a slogan. Tibetans tend to rely on prayer to facilitate a safe arrival. And, Bicycling is impossible, but is not without its hazards: Cyclist in Tibet have died from road accidents, hypothermia and pulmonary oedema 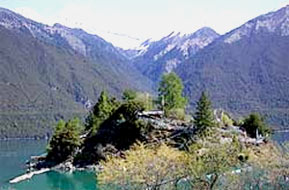 Lake Basumco : Basumco LakeBasumco means "Water of Aquamarine". It is stunning highland lake lying 90 kms west of Kongpo Gymdo Country. Basum has another Tibetan name, Tsokou, which means "green water". Besides offering awesome views, many glaciers on the upper reaches of the lake provide it with a constant supply water of fresh water. The lake surface is on average about 3,538 meters above sea level. The lake covers an area of 25.9 sq km, and from the surface the deepest part is about 60 meters deep. The blue, limpid lake water and the verdant mountain around the lake combine into a charming scene. The Lake is fully decorated with snow capped mountains and the primitive forest decorated with a little island. This lake, together with the delicate temple on the island, is regarded sacred by the Red Sect of Tibetan Buddhism, attracts many pilgrims every year.

The Yarlung Zangbo River has a big turn at the junction of the four countries. To the east of the turn stands Namjabbarwa Peak.The peak is 7,782 meter high, and is the 15th highest peak in the world. It reflects an obvious vertical landform in Indian Ocean. In its valley its tropical rain forest and above the snow line, it is a snow fall.

The lake is 3,800 meters above sea level. The Lake is 26 kms long and one or five grows ancient Salix Mongolica. The Parlung Zangbo River originates from here. Around the lake are green postured and fields, like an area in the south of the Yangtze River.

Gyaxing Valley 20 kms away from the Paggar Monastery. The waterfall is 25 meters high and drops from the top of the cave in three curtains. around the cave grow ancient vines. The cave is quiet and zigzags. in addition, there are three hot springs in the valley and their water is effective in curing many kinds of diseases.

Zayu is located in the southeast part of the Tibet Plateau. Zayu has an area of 16,000 sq km, and is less than 2,500 meters above sea level at average. The country has warm climate year round and has a beautiful landscape. The wildlife includes otter, stone marten, leopard and lesser panda.

Pungri Holy Mountain is to the southeast of Nyangchi Country on the northern bank of the Yarlung Zangbo River. It is one of the mountain respected by Bon believers. It takes three days to walk around the holy mountain at least. And visit to the monasteries around it, it takes seven days.