In the middle of the Asian content lies a "sea of great mountains ",which is unique on earth. It is the Tibetan plateau, known as the "roof of the world", where there are numerous hills at an average altitude of more than 400 meters. Tibet is compelling to visitors. A magical trip which admires the beautyTibet Mountaineering of this remote Himalayan country and the spiritually of its people. Tibet has longed exercised a unique hold on the imagination of the West : 'Shangri La', 'the Land of Snows', 'the rooftop of the World'. Tibet was opened to foreign tourism in 1992.
Tibet offers some of the awe-inspiring scenery in the world and the sheer scale of the high altitude valleys. In the far west of Tibet is mount Kailsah, the most sacred mountain in Asia which is vendered by Buddhist Hindus Jains and the followers of the ancient Bon religion.

There are many mountain peaks in Tibetan plateau that remain untouched by man's footsteps. The 7,782 meters Namjabbarwa Peak was once the highest yet to be scaled by man. The face of the peak was so steep that efforts by a team of Chinese and Japanese mountaineers in 1991 ended i failure with a number of deaths. The "Roof of the world" is a world of mountains which pose ever changing challenges to mountaineers who always want to scale new heights or climb mountains that have been climbed before by different routes. From last few years the region has introduced some multinational joint climbing, straight line approach, climbing without oxygen supplies, speed climb and solitary climb. In order to accommodate the needs of mountaineers from around the world, a total of 44 mountain peaks have been open to international climbers since 1980.Now trekking in the Tibetan Plateau will become increasingly popular as a retreat into nature.

To carry your bike on the flight to Nepal ad then on to Tibet, you will need dismantle your bike and ideally put it into a cardboard box. Using the box in which the bike originally came is easiest. Essentially through, airlines require that you take your pedals off and turn the handlebars parallel to the bike's frame. To fit it into the cardboard box you need to dismantle your front handle bars. 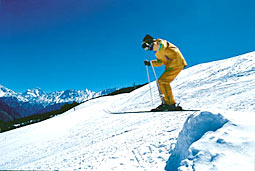 The Tibet Adventureshighlight on these trips is Mt. Kailash. It is an important site for Tibetan and Indian pilgrims who make a 53 km circuit, or kora, of the mountain. This circumambulation, clockwise for Buddhists and Hindus & anti-clockwise for Bon followers, is said to erase the sins of a life time. The mountain is 6714m is high and snowcapped peak is awe-inspiring sight. Just 30km away from Mt Kailash is another important pilgrimage site, the beautiful and serene Lake Mansarovar.It was formed in the mind of Brahma and Indian. Tibetan pilgrims can also be seen circumambulation this lake, a distance of 90 km. The heart and soul of Tibet and an object of devout pilgrimage is still a city of wonders.