Transportation condition in Tibet has changed greatly since the liberation after 1951 when pack animals were the main transportation in the region. Now highways and airlines are connecting it with other regions of China.
Planes are the fastest means to move onto the Roof of the World. There are two airports in Tibet while Gonggar airport connects Lhasa, hence Tibet, with Chengdu, Xi'an, Beijing, Chongqing, and even Kathmandu and Hongkong. There is no air route within Tibet at present. Traveling by air into Tibet will surely brings visitors unique and thrilling experience. Just imagine that you are above the world highest snow and cloud clad peaks! However, since planes travel fast and there is little time for acclimatization. Click to see detailed flight schedules. 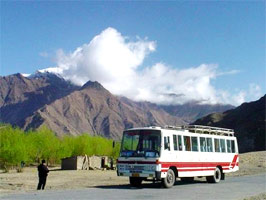 Tibet TransportThere are five highways stretching into Tibet. Sichuan-Tibet Highway is the longest, 2413 kilometers (1496 miles) long, built in 1950 and opened for traffic in 1954. The road climbs up and down 14 high mountains which average 4000-5000 meters (13120-16400 feet) high, and flies over a dozen of famous rivers such as Lantsang River (Mekong). The climate along the road presents beautiful scenery ranging from spring to winter. However, the road condition is not good.
Qinghai-Tibet Highway starts from Golmud of Qinghai, the only road providing bus service among the five highways and the main road to travel Tibet. 1160 kilometers (720 miles) long and averaging 4000 meters (13120 feet) high, along Kunlun Mountains and vast grassland, which amaze people living in modern civilization, the bituminous road is the best road leading to Tibet.
Xinjiang-Tibet Highway starts from Yecheng in Xinjiang. It runs 1455 kilometers (902 miles), winding its way among fives mountains soaring more than 5000 meters (16400 feet) high above the sea level. A spectacular view of Mt. Kailash and Lake Manasarova shows before travelers while traveling along the road.
Yunnan-Tibet Highway spans 800 kilometers (492 miles) to reach Markham, less beaten by travelers. Chinese-Nepalese Highway is another main road traveled often. It stretches 900 kilometers (558 miles) from Kathmandu to reach Shigatse and Lhasa.
Among the five highways, only Qinghai-Tibet Highway and Chinese-Nepalese Highway are open to foreigners at present. Inside Tibet, there are now regular buses shuttling between major towns..
The conditions of minor roads only allow using jeeps. In Lhasa minibuses are the main transportation. It is easy to hire a taxi in the capital.. Pedicabs are unique vehicles to look around the highest city in the world. Bikes can be easily hired at Lhasa at most hostels.