Shannan is located between 9014'E-9422'E and 2708''N-2497"N, at the lower reaches of the Yarkung Zangbo River south of the Kangdese Mountains - called the Nyainqentanglha Mountains on the Qinghai- tibet plateau.It is bounded by the Lhasa (capital city if tibet) to the north. Shannan occupies one fifteenth of the total land area of the tibet autonomous region. It included 12 countries, four of which are in border areas. Shannan's topography is typical of the southern Tibetan valley area, with a terrain gradually declining from west to east and at an average elevation of about 3,700 meters. Shannan enjoys a temperate and dry climate, with average annual rainfall of less than 450 meters. The rainy season is concentrated between June and September. Shannan has many kinds of flora and fauna. It bounds in qingke barley wheat, broad beans, peas, corn and buckwheat making it one of the major grain and oil producing regions in Tibet. The region is full of vegetables, fruits. The city is enriched with wild plant resources. There are several hundred medicinal plants. Its famous medicinal herbs include sinensis, fritillaries thun-bergli, root of red salvia. Shannan has many mineral resources include chromium, gold, copper, iron Zinc, magnese,jade and marble. The reserve of the chromium have been verified at 5 million tones, accounting for 45% of the country's total. Average grade therefore it boasts the biggest chromium resources base in China. It has many rivers and lake sans so it is rich in water resources. Shannan attracts numerous Chinese and foreign tourists with its ancient cultural heritage, rich and strong national flavour, enchanting natural scenery, unique historical sites and other tourism resources.


Shannan enjoys a temperate and dry climate, with average annual rainfall of less than 450 millimeters. The rainy season is concentrated between June and September. Annual sunshine is between 2,600 and 3,300 hours. Average annual temperature is between 6.0 and 8.8 degrees Celsius, with the record high at 31 degrees and a low at 37 degrees below zero. Average annual wind speed is about 3 meters/second, with the fastest speed at 17 meters/second. The windy season is concentrated between December and March.

Samye was Tibet's very first monastery and has a history that spans over 1,200 years. It is designed to represent the Buddhist universe and many of the buildings in the courtyard are cosmological symbols. The central building of Samye, its foremost feature, comprises a synthesis of architectural styles: the ground and first floors were originally Tibetan in style, the second floor was Chinese and the third floor Indian. 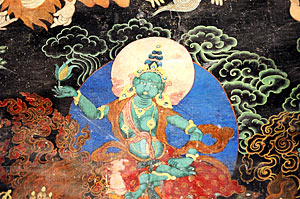 Dratang Monastery was established in 1081, the founder of monastery Drapa Eshepa who is one of the 13 sages in Dranuang Country. This monastery belongs to Sakyapa Sect. The monastery absorbed some architectures style from Someye Monastery, there were three surroundings walls but now only 750 meters left, it has 3 stories before but now only one left. The murals of this monastery are the most precious.

Changzhug Monastery was built in the 17th century and has been repaired in various historical periods. Monastery standing by the highway on the east bank of the Yalong River in Nedong country. The monastery houses a precious Thangka picture of a Buddha inlaid with pearls and gems.

Minzohling monastery was built in the 10th century and had its current name when it was rebuilt in 1677. It is one of the three great monasteries of the Rnyingma Sect. The monastery has paid attention to the research of Buddhist classics, astronomical calendar, calligraphy rhetoric and Tibetan medicines and is famous for its achievements in these fields. 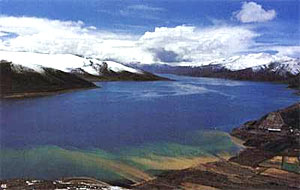 Yamzho Yumco, shannanYamjhp means upper pasture and Yum means green jade in Tibetan. In a bird's eye view, the lake is like a big piece of sapphire inlaid in the mountains and is very beautiful. The lake is situated 4,400 meters above sea level. It covers an area of 800 sq km and is 30-40 meters deep. The lake is rich in hydropower resources. Its surface is more than 800 meters higher than the Yarlung Zangbo river at the foot of the mountain. Also here stands the Yamzho Yumco Power Station well known for its high elevation in the world.

Chim-puk Hermitage is a warren of caves that was once a retreat for Guru Rinpoche and other high ranking lamas. Chim-puk Hermitage is to the north-east of Samye. After crossing through desert-like territory for a couple of hours, the path ascends into the surprisingly lush area in which the caves are found. It can be an ideal route for day hike.

kanggardu Mountain is 7,060 meters above sea level.It is fully covered by snow year round. Its topography is lower in southern section and higher in northern section. Its main peak is surrounded by dozens of peaks with an elevationof more than 6,000 meters. In Valley there are many glaciers. Here the average rainfall is more than 400mm. On the mountains slopes and gullys are dense forests teeming with dozens kinds of wildlife such as wild donkeys and Mongolian gazelles. 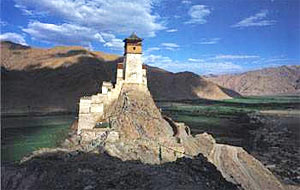 Yumbu Lakang, ShannanThe first palace in the Tibetan history, it is also one of the oldest buildings in tibet. It was said that the palace was built in the second century B.C. by the first king Nyatri Tsanpo. It houses the statues of the three-world Buddhas and Tsanpos of various historical stages Nyatri Tsanpo, Lhatu and Trisong Detsen. A Buddhist sutra fell from the the sky onto the roof of Yambu Lakang. Nobody can read the book. Upstairs there is small chanting hall, which houses a Sakyamuni and chenrezi. A mural gallery above tells Nyatri arrival from the sky and other stories about him as well as on other aspects of Tibetan history. 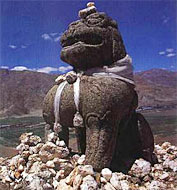 Tibetan Kings Tomb, ShannanFrom all of the tombs, the most remarkable one is King Songtsan Gampo's. Thirty third king Gampo , moved his capital Lhasa to Lhasa, then unified the whole Tibet. In order to cherish the memory of their hometown and the relatives, also ancestors kings from the 33 onwards were buried back to Chonggye. According to historical records there are five underground chambers containing statues of Songtsan Gampo. Shakyamni and Padmasambava with great quantities of Gold,silver,pears and agatesas funeral objects. The coffin itself is said to have been laid in the central chamber and to its left side it said to a suit of amour worn by Songtsan Gampo expedition.